Designed and built during the 1940s, the Redsand Towers (also known as The Maunsell Towers) protected British shipping lanes from mines and attacks during the Second World War. It basically stood abandoned, since that time, short of a brief stint as a pirate radio station in the 1960s. Up until 2003, no serious consideration had been paid to the preservation of any of these historic structures. 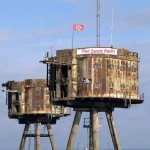 Now discussion is taking place within Government Agencies, which will determine the future of The Maunsell Towers.

July 2007 saw the first licensed Red Sands Radio broadcast from the Redsand Fort.  The 10 day Restricted Service Licence allowed transmission on medium wave and a webcast, commemorating 40 years since the demise of “offshore radio” from the Thames Estuary forts, which VoIPon proudly sponsored.

To date, media support has been excellent. The Project has been covered by the Times, BBC Breakfast TV, The Telegraph and a host of local TV, Radio and newspapers. Project Redsand is supported entirely by voluntary contribution and is a registered charity.

Once restored, some of the proposed uses of the fort include communications towers and a museum.

You can also help preserve this historic structure by donating to registered charity number 1117429.

Xorcom to Announce Product Enhancements at IT EXPO