VoIPon Interview Digium on what to expect from Asterisk 12, the benefits of upgrading, future plans and AstriCon 2013

Craig Herrett speaks to David Duffett about what we can expect from Asterisk 12, the benefits of upgrading, future plans for Asterisk and an insight into AstriCon 2013.

You can Listen to the Digium Podcast and see the full transcript below:

Craig Herrett: Broadcasting from various countries around the world using Voice Over IP Technology, this is VoIP Uncovered, a VoIPon Solutions UK Podcast. I’m Craig Herrett. Today, we are interviewing Digium, the company that founded Asterisk. Here with me is David Duffett. Hi David.

David Duffett: Hi there Craig, how are you doing?

CH: I’m excellent, thanks. How are you?

CH: OK, so what can we expect to see from Asterisk 12 and how is it different from earlier versions of the most popular Open Source PBX?

DD: Asterisk is a community driven project, and as such, it’s the community that gathers to decide the direction of Asterisk. That’s exactly what happened last October in Atlanta, Georgia in the USA. About 50 people from the open source community got together, including Digium folk as well, and we sat around the table and talked about the direction that asterisk should take and what needed to happen.

The two strongest were, number one; the SIP channel within Asterisk, which is effectively a kind of home-grown SIP channel, that the wonderful Mark Spencer wrote in the early days of Asterisk which has pretty much stayed intact. While things have moved on, we’ve kind of kept with it and the decision was that we really needed to move now to something that would allow us a bit more interoperability and a little bit more modularity in the way we implemented SIP.

So that was one of the big things that came out, and the other thing that came out was the way that people like to use Asterisk by writing programs of their own to sit on top of Asterisk and get it to do things. That’s done over a thing called an API, Application Programming Interface, and there’s a couple of ways already to do that with Asterisk. Some listeners may be familiar with the AGI, the Asterisk Gateway Interface, and others may have used the AMI, Asterisk Manager Interface. So there are two interfaces out there. They’re there for one purpose or another and people will use them as they need to, but it was thought that we could do with a better way of allowing people to come in and use them. So, we have been developing what’s called a RESTful API which is more friendly to web developers and will allow people to do even more with Asterisk.

And so they’re the big two changes that you’ll see coming out in Asterisk 12.

CH: Fantastic. OK, have any particular technical issues been addressed and resolved in this issue compared to previous versions? I just want you to explain the advantages of upgrading.

The focus is new features, rather than stability. However, when we go to the release after that, things will have settled down a bit and we’ll release a version that’s a Long Term Support release. It’s not a case of resolving issues, as such because there weren’t any terrible issues to resolve. It’s a case of expanding and enhancing, and the architectural work that we have done on the SIP channel, and by the way, we have introduced a completely new SIP channel called PJSIP which itself another Open Source project so we have integrated that into Asterisk. That’s going to allow people more interoperability with other SIP stacks, but it’s also going to lead to performance improvements over the longer term.

Asterisk 12 is not necessarily a release where you’re going to see all sorts of changes from a user point of view, however, the foundation work is in there to allow people to see a better Asterisk in the future.

DD: Well, in terms of the Digium phones like the D40, D50 and D70, we have a module called the DPMA, the Digium Phone Module for Asterisk. That’s a special piece of software that’s not Open Source, but is totally free. It allows you to do some very exciting things with Asterisk 12, and indeed it was there in Asterisk 11, but we have continued to develop it. Things like very, very flexible and fast provisioning of the Asterisk phones, also contacts management and things like that. We’re seeing now that distributions like the FreePBX Distro and Elastix are starting to adopt the DPMA into them, so not just in Asterisk 12, but in some of the distribution releases out there from the community that incorporate Asterisk 11 even, the DPMA support is in there.

Digium Phone users will not only have the great advantage of having the API that’s available, the JavaScript API to write their own apps on the phone, but they’ll continue to see enhanced support through the use of that special module.

CH: With Asterisk being well established and having such a loyal following, what can we expect to see from future versions?

DD: Well that of course, is all down to the community. One of the things that the community would really like to see, is the ability to get hold of information about the way asterisk is used. So for instance I’m sure you guys at VoIPon occasionally have people ring up saying “where’s the sweet spot that asterisk gets used for, is it 50 users or is it 100 users, or 200, is it a contact center or do people more often use it as a standard PBX”.

So one of the things we (the community) have been looking at is finding a way to pop into asterisk, a mechanism for extracting that information, doing it overtly so there is nothing behind the scenes going on. We haven’t done it yet so this is one of the things we are looking at for future releases. The idea is to pull out information that would be there from the community for the community. So as an asterisk community member, if you go to a certain section of asterisk.org and you can see right now there might be 2 million asterisk servers live, most of them have 20 or more connections and 20% are being used as contact centers, 70% as PBXs, that kind of thing. So that’s one of the things that we are looking to do in a future release.

CH: Could you sum up why customers should choose to buy Digium as opposed to the other competing platforms out there such as Sangoma, Xorcom and OpenVox?

DD: I think the absolute best reason I can give you, is Digium are the creators of Asterisk. We pay the salaries of a large number of software engineers that make this amazing thing called Asterisk and of course there are open source contributions as well which we very much value. In terms of the main sponsorship, and putting our money where our mouth is, we are the ones that do that. So when you buy a Digium product, whether that’s a PRI card such as the TE133 and TE134 or a Digium phone, or maybe send someone on some Digium authorized Asterisk training, a proportion of that money is going back in and funding the project. Whereas should you buy anybody elses product, they will probably be compatible but you won’t be injecting any money into the ongoing development of Asterisk.

CH: Ok David, so we’ve obviously started speaking a little bit about about AstriCon so could you tell us a little bit more about it?

DD: Yeah of course. AstriCon is the global gathering of Asterisk people, this is not just developers, although developers come along, it’s not just people reselling asterisk solutions, although they come along too. It’s not just people that make products just to go with asterisk. We were just talking about other competitors to Digium out there, well all of those folk also show up at AstriCon. It’s just about everybody who’s serious about Asterisk will show up and this year we’re back in Atlanta, which is kind of nice because that’s where AstriCon first occurred. Ten years ago it happened in Atlanta and in 2013, October this year to be precise, it’s the 8th to the 10th and it will be at the Renaissance Waverly hotel in Atlanta and it’s 3 days just packed with asterisk stuff.

One of the amazing highlights this year is we’ve got one of the tracks totally devoted to a security masterclass, so whether people are using asterisk as a PBX or they’re interested in security at a Telco level for SIP, then all of that is going to be covered and a lot more. All of the teachers on that, or all of the asterisk community members will be doing a big panel at the end so people can ask all of their security questions.

Of course WebRTC is another thing or topic that is very hot at the moment and we’ve got several talks devoted to asterisk and WebRTC. We’ve got deployments from people like Berkshire Hathaway over there in the US being talked about in terms of case studies and how to’s and all things like that. So it’s a three day conference and exhibition and I would reiterate the message that if you are serious about asterisk, you’ll get over to AstriCon and in fact, let me just share with your blog listeners a discount code. If they go to www.astricon.net and go to the registration page there, there is space for a discount code and if they use AC13VUC to get 20% off the ticket price. The dates are the 8-10th October 2013 and it’s in Atlanta, Georgia. Atlanta benefits from being a reasonably priced place for us Brits to fly over to.

CH: Excellent I’d like to thank you for your time today David, and for bringing VoIPon listeners up to speed with the developments of Asterisk 12. This has been a VoIPon, VoIP Uncovered podcast, brought to you by VoIPon Solutions. For more information, please visit www.voipon.co.uk. 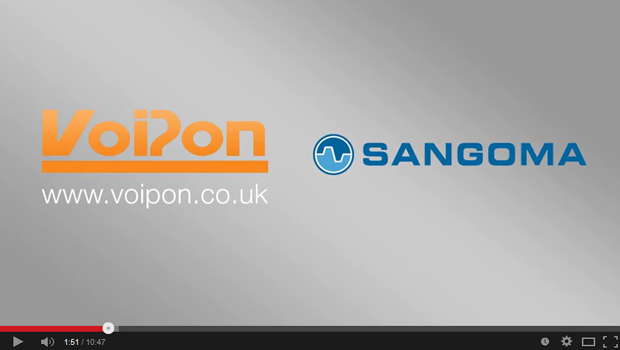 VoIPon interview Sangoma on the last 12 months, the Vega series of VoIP Gateways, Session Border Controllers and much more