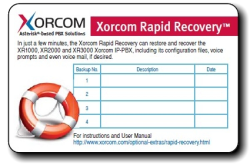 Xorcom Rapid Recovery, a credit-card-size Disk-on-Key device for recovering your IP-PBX, has recently had its full PBX Backup and Restore Utility improved with this latest round of enhancements.

In just a few minutes, the XRR can restore and recover the Xorcom IP-PBX, including its configuration files, voice prompts and even voice mail, if desired.

Since it is possible to give each backup a descriptive name, many different IP-PBX system backups may be stored on the same DOK. The XRR compresses typical Asterisk configurations, including the complete trixbox CE™ or Elastix™ Asterisk distributions, to less than 0.5 GB. Consequently, a standard 2 GB DOK will typically store up to 4 different system recoveries.

Due to previous problems experienced during restore of RAID backups on smaller disks, the Rapid Recovery utility has been improved. As a result, the “kernel panic” no longer occurs during the restored server boot procedure.

Unlike in previous Rapid Recovery versions, backups of DRBD disks may now be restored on disks of a different size than the original disk.

User voice mail greeting messages are now included in the standard back up.

The new version of the Rapid Recovery software is available on new units purchased only. Previously purchased units will continue to work fine as is, since the modifications are enhancements and not bug fixes.

Xorcom Awarded best of show at IT Expo 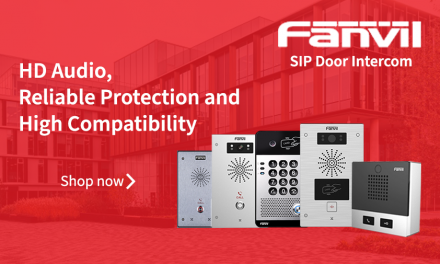