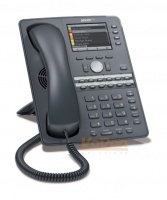 For the second year in a row the snom 7xx series of IP phones has been recognized as an INTERNET TELEPHONY Product of the Year,” said Michael Knieling, Chief Operating Officer of snom technology AG. “Our introduction of the snom 710 in September rounded out the series with a dynamic entry-level business phone and the recent qualification of the 7xx series for Microsoft Lync adds versatility for resellers and businesses. Thank you to INTERNET TELEPHONY for this recognition and honor.”

snom is committed to building partnerships for the snom 7xx series and other products with standards-based SIP technology providers. All snom phones are designed for interoperability with all types of partners – from premise-based IP PBX for small business to large service provider cloud-based VoIP services/hosted IP PBX and Unified Communications platforms.

It is with pleasure that we recognize snom with a Product of the Year Award. The editors of INTERNET TELEPHONY have verified that 7xx series displays quality and innovation while providing solutions to real business communications challenges,” stated Rich Tehrani, CEO, TMC. “I would like to congratulate the team at snom for their commitment to advancing IP communication technologies.”

Konftel 55 series – at the centre of communication